Abstract: In the production notes to his 1944 play The Glass Menagerie the american author Tennessee Williams voices his dissatisfaction with realism and is in contrast calling for a radical and transformative expressionism in theatre which should also make use of different forms of media. It is these aspects of the non-realistic, the expressionistic exageration, as well as the transmedial transformation which lie at the heart of the melodramatic genre.

As melodrama is often derided for its exagerated sentimentality, its heavy use of steroetyopes, as well as for its artifical visuals and unconvincing overacting this seminar will argue the opposite: It is precisely through these different forms of excess that melodrama develops a unique (and decidedly awkward) affective force. The excessive and awkward non-realism of melodrama is thus used to express a different and often surpressed form of psychic reality.

Picking up on theoretical texts by Sigmund Freud, Linda Williams, Peter Brooks or Jonathan Goldberg and looking at plays by Tennesse Williams, novels by Patricia Highsmith and film melodramas by Vincente Minnelli, Douglas Sirk, Todd Haynes or John Waters we will analyze the melodramatic affects (and effects) as they are not only represented but actually constructed by different media. Furthermore, we will discuss the central role melodrama and particularly film melodrama has played in feminist discourse and in queer culture. Queer artists (such as Williams, Highsmith or Waters) as well as queer audiences have recognized in what Jonathan Goldberg calls melodrama’s „aesthetics of impossibility“ a metaphor for homophobia and supressed sexuality within a heteronormative society. It is also these forms of repression that the excesses of melodrama want to break with. 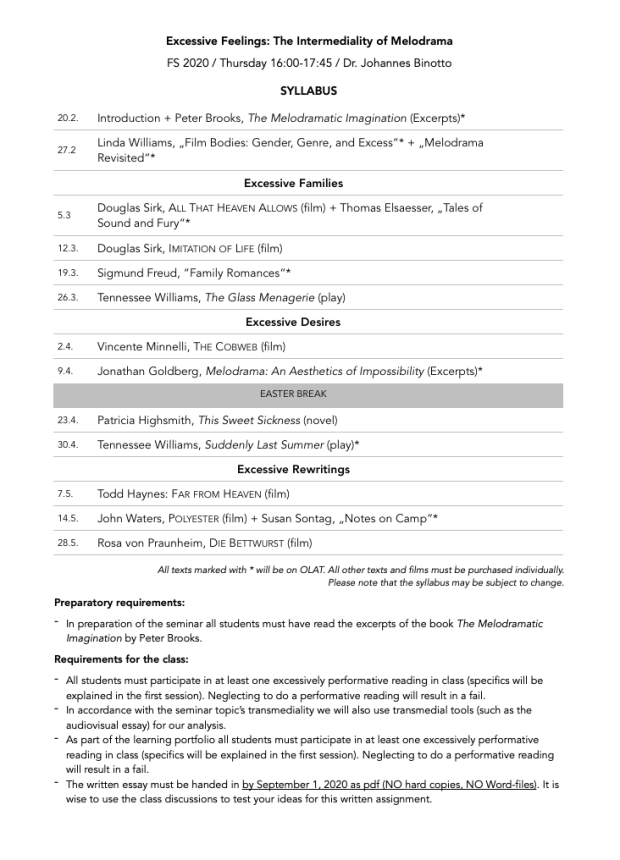