Abstract:  As this spring sees the release of the 25th James Bond movie, this seminar will investigate the roots, themes, mutations, as well as the ongoing appeal of spy fiction in general and of 007 in particular. Often (and justifiably) critized as a relic of cold war politics and toxic male culture the character of the secret agent not only embodies but also debunks these ideologies. He can thus be read as an ambivalent symptom of his time.

By analyzing the Bond noveIs written by Ian Fleming as well as their film adaptations and comparing them to precursors like Graham Greene’s satire Our Man in Havana as well as to recent genderbending rewritings like the graphic novel Velvet we want to trace not only what makes spy fiction so problematic but also how it already contains its own deconstruction.

Theoretical texts by Walter Benjamin, Julia Kristeva, Umberto Eco or Larry Rickels will be instructive for such a reading with and against the grain.

Of particular interest will be questions of textuality and mediality that are central to spy fiction both in regard to their narrative content as well as to their own textual or cinematic form: Secret agents like Bond are above all media agents in the sense that they serve as mere instruments and messagers for their superiors, but also in the sense that they themselves have to rely constantly on different (and often disfunctional) media technologies. Less the heroic man of action as which he may see himself, the secret agent shall be revealed as a split subject, fractured and hysterized by both the media around as well as the neurosis inside him. Spoiler alert: Fans of 007 may be shocked by what we find out. 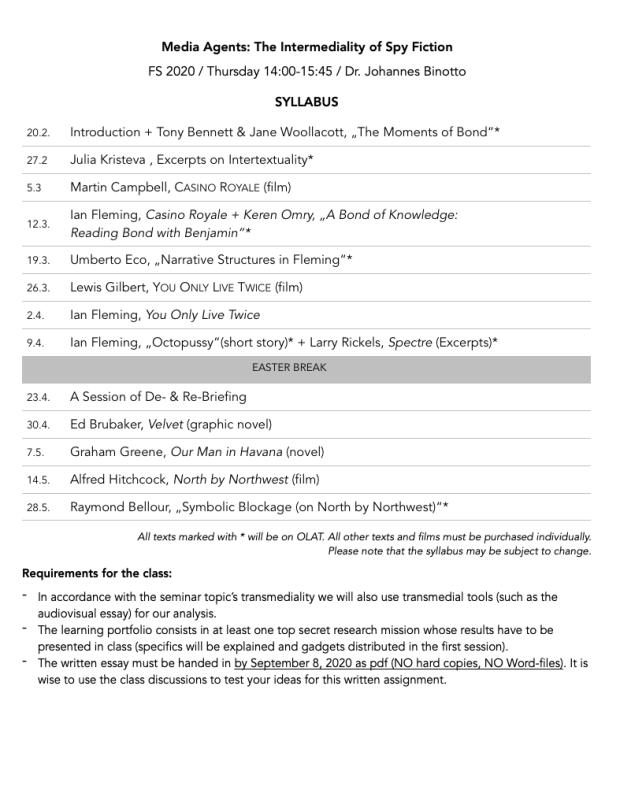